Coree Voyage is proud to be a signatory of the Glasgow Declaration on Climate Action in Tourism.

As a signatory of the Glasgow Declaration, we commit to deliver plans aligned with the pathways to cut tourism emissions in half over the next decade and reach Net Zero emissions as soon as possible before 2050.

- Support the global commitment to halve emissions by 2030 and reach Net Zero as soon as possible before 2050;

- Deliver climate action plans within 12 months from becoming a signatory (or updating existing plans), and begin implementing them;

- Align plans with the five pathways of the Declaration (Measure, Decarbonise, Regenerate, Collaborate, Finance) to accelerate and co-ordinate climate action in tourism;

- Report publicly on an annual basis on progress against interim and long-term targets, as well as on actions being taken;

- Work in a collaborative spirit, sharing good practices and solutions, and disseminating information to encourage additional organisations to become signatories and supporting one another to reach targets as quickly as possible. 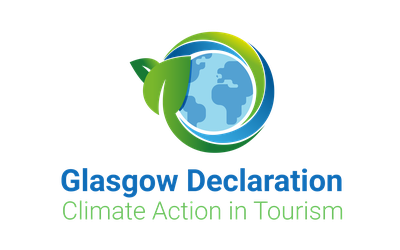